Bees (and beekeepers) need your help

Up to half of Indiana honey bee colonies die out each year. Small-scale beekeepers (like us) collaborate with scientists and commercial producers to save honey bees and native pollinators. But we need your help.

Each year, honey bee colonies face many challenges. Perhaps you’ve read about Colony Collapse Disorder, or the many pesticides, parasites, and diseases that can destroy a healthy hive.

All season long, beekeepers defend their hives against aggressive pests like the Small Hive Beetle and Varroa Mites. In the fall, bee hives can be attacked by Yellow Jackets or robbed by stronger bee colonies. During our long, cold, Indiana winters, honey bees can succumb to cold and starvation. 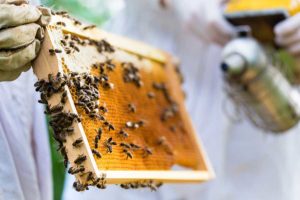 To replace lost colonies, Indiana beekeepers often will order a “package” of bees from a southern state. Three pounds of bees (about 10,000 insects) will typically cost about $110 – $130, but may not produce honey the first year. If that colony perishes, the beekeeper’s investment is lost.

Beekeeping equipment must be rotated and regularly replaced to reduce disease. One complete hive can cost several hundred dollars. Add a second (or third) hive, some protective clothing, a few gadgets, and a honey extractor — the costs can be daunting.

If you’re concerned about bees, we invite you to make a contribution to strong, healthy honey bees.

Take a look at our Adopt-a-Hive sponsorships today. Join our eco-friendly, backyard adventure. We appreciate your support, and the bees with thank you, too!